The S&P 500 fell 1.2% on the week aided by a 2.6% drop on Friday where both China and the United States increased retaliatory tariffs. Small cap equities continue to be weak and fell 2.5% on the week. Small cap equities have underperformed the S&P 500 by 10% over the last six months. Emerging market equities have completed a full retrace to the December lows, now down roughly 12% from their April highs. Safe haven assets such as gold and Treasury bonds continue to move higher in price.

The big news of the week has been a storm of rhetoric on the policy front. Jackson Hole revealed a Federal Reserve (Fed) that does not have a strong consensus to lower interest rates. While it’s likely at least one more cut will unfold, it’s unlikely a consensus can be formed to cutting rates in an aggressive manner. This is a negative headwind at the margin for equities, which have been anticipating interest rate cuts. It’s also suggestive of continued Treasury curve flattening, which has taken place this week. The 2-year and 10-year Treasury inverted recently, and this week saw the 3-month and 30-year Treasury invert. This latest inversion has a 100% track record in predicting recessions.

On Friday China retaliated with some tariffs and then President Trump indicated more retaliation. The market sold off on the unknown as the decision wouldn’t be announced until after the market closed. The United States raised tariffs modestly, but since they are set to go into effect in September and December some hope remains there will be a last-minute resolution. Any indication of communication between the two sides only furthers these hopes and pushes equity prices up in anticipation.

Former Federal Open Market Committee Vice Chair, Bill Dudley, penned a piece of possibly the most controversial comments ever made by a current or former high-ranking central bank official. He concluded his opinion piece with these comments, “There’s even an argument that the election itself falls within the Fed’s purview. After all, Trump’s reelection arguably presents a threat to the U.S. and global economy, to the Fed’s independence and its ability to achieve its employment and inflation objectives. If the goal of monetary policy is to achieve the best long-term economic outcome, then Fed officials should consider how their decisions will affect the political outcome in 2020.”

And if that wasn’t enough, current head of the Bank of England made a pitch to put digital currencies at the center of the global monetary system. 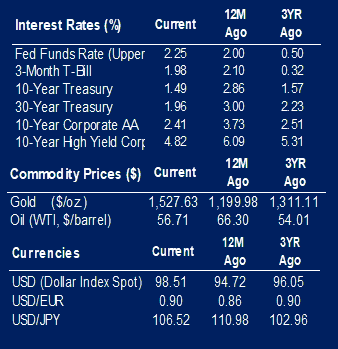 Domestic equity markets were up on the week as the second quarter ended. The weekly gain in the S&P 500 was 2.2% and helped bring the quarterly return to 20.5%. Foreign equities were negative on the week and continue to underperform domestic equities. The Bloomberg Barclays Aggregate Bond Index was up fractionally, and gold prices...

There was a decline in domestic equity markets this week. The S&P 500 Index was down 2.01%. Global increases in COVID-19 cases have led to increased fears of a pronounced “second-wave.” The Google Activity Index, the blue line in the graph below, shows increasing global mobility as lockdowns ease. More people are going out. This...

Equity markets fell sharply last Thursday in what was the largest drop since March. The S&P 500 was down almost 6% as COVID-19 cases are rising around the globe. Stocks would claw their way back with the S&P 500 ending down 2.4% for the week. The NASDAQ continues to be the outperformer in down markets...