The year started with an event that caused volatility in oil markets. The drone strike of the Iranian General, Qassem Soleimani, led to swings in the energy markets. The price for WTI Crude Oil shot up by 3% the day the strike was announced. Over the last week, the price for the commodity peaked at $63.27/barrel and the price as of yesterday’s close was down to 59.61. The close to 5% decline on January 8 came after de-escalation rhetoric. The Energy sector underperformed the broad market in 2019 and predictions for 2020 are mixed. Unpredictable global politics have an outsized impact on energy markets.

Coming into 2020, manufacturing continues to be a concern. December numbers for the Markit PMI Manufacturing Survey were a little lighter than expected at 52.4 but still in positive territory. This index is a diffusion index where 50 denotes no change over the prior month. The expectation was for a reading of 52.5. On the other hand, the ISM Manufacturing Index, also a diffusion index, came in at 47.2, lower than the expected 49 and in negative territory. There’s a higher weight to future growth expectations in the Markit number than the ISM number. Historically, the Markit number has been more accurate.

Consumer credit dropped to $12.5 billion in November from $19 billion in October. This decrease is closer to the one-year and five-year averages of $15.12 billion and $14.64 billion. The decline was led by a drop in revolving credit. Annually, consumer credit is up 3.6%.

Car sales numbers were released in December. Over the period, 16.7 million light vehicles were sold, but the expectation was 17 million car sales. Vehicle sales were flat in 2019, although we saw some spikes in March and May. The average over the year is 16.9 million.

Construction saw a bit of an increase in November. The increase of 0.6% was better than the expected 0.30% and the previous month’s 0.12%. Construction spending has stayed flat over the last year. Markets keep hoping low interest rates and rising wages will lead to consistent demand for housing, increasing construction spending. 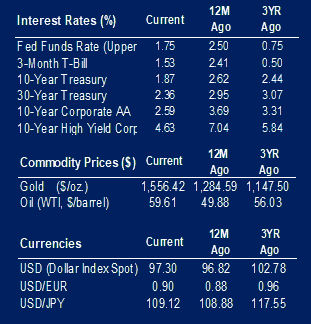 Kuuku is a Managing Director at BTC Capital Management with nine years of investment management experience. Kuuku’s primary responsibilities include portfolio management and analysis. Kuuku attended Drake University and double-majored in finance and economics. He is a Chartered Financial Analyst.

The information within this document is for information purposes only and is not intended as an offer or solicitation with respect to the purchase or sale of any security. Statements in this report are based on the views of BTC Capital Management and on information available at the time this report was pr

Equities continued to run as we hit the middle part of the month. The S&P 500 added another 1.2% for …

END_OF_DOCUMENT_TOKEN_TO_BE_REPLACED

Equities posted strong returns for the month of December with the S&P 500 up 3.0% and emerging market equities up …

END_OF_DOCUMENT_TOKEN_TO_BE_REPLACED

This last Weekly Insight of 2019 highlights the end of another eventful year. We came into 2019 with some fire …