The big news this week was the drone attack on the Abqaiq oil facility in Saudi Arabia. The attack impacted 5% of the global oil supply. Crude oil prices were up 13% the first trading day after the attack, but prices have since moderated. The moderation is due to the Saudis announcing they expect most of the production at the facility to be up and running by the end of the week. Oil is up 5% from the trading day before the attack.

It is an eventful week when a Fed rate cut is not the top economic story. The relegation of this announcement to this second paragraph may have to do with the decrease being widely anticipated. The cut of 0.25% is the second such cut of the year. The announcement did show some dissension among Federal Open Market Committee members. Three of the members voted against the 25 bps cut.

Economic news for the week is more positive than not. Retail sales for August were revised upward to 0.4% from 0.2%. Strong sales of autos and an increase in online sales led the growth for the month. Auto sales grew by 1.8%. Nonstore or online sales grew by 1.6%. Gas stations and clothing retail stores held back the retail sales number the most with declines of 0.9% for both industries. There was no growth over July when you exclude the auto sales. The expectation was for retail sales excluding autos to see a growth of 0.2%.

Core CPI, an inflation measure excluding food and energy, was higher than expected month-over-month and year-over-year. Month-over-month growth for August was 0.30% and year-over-year growth was 2.4%. The expectation was for growth of 0.2% and 2.3% respectively. Including food and energy, the headline CPI number of 0.10 – month-over-month, was in line with expectations. The year-over-year growth of 1.7% was lower than the expected 1.8%. The increase in price levels was led again by autos. Pricing for used cars and trucks increased by 1.1% over the one-month period. 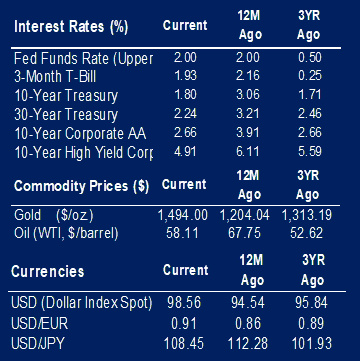 Kuuku is an Investment Analyst at BTC Capital Management with nine years of prior experience in the Wealth Management division of Bankers Trust. Kuuku’s primary responsibilities include portfolio management and analysis. Kuuku attended Drake University and double-majored in finance and economics. He is a holder of the right to use the Chartered Financial Analyst® designation.

Equities sold off again this week, taking their cue from weakness that began during the Federal Open Market Committee (FOMC) press conference. The S&P 500 was down 4.4%, while emerging market equities fell 3.5%. Again, fixed income provided no hedge with the Bloomberg Barclays Aggregate Bond Index down fractionally. The NYSE Arca Gold Miners Index...