The preliminary GDP numbers for the second quarter were released this week. The decline in the quarter was adjusted from 32.9% to 31.7%. A 1% adjustment in GDP growth used to cause panic among economists. However, the magnitude of the initial decline is so large that people barely blinked with the adjustment.

Personal consumption expenditure (PCE) grew by 1.9% in July. Consensus expectation was for growth of 1.5%. The growth was led by an $82.1 billion increase in spending on goods, led by new vehicle purchases. Spending for services grew by $121.2 billion, led by increases in healthcare and food services spending.

The PCE deflator, the Federal Reserve’s preferred inflation measure, came in as expected at 1% year-over-year. Core PCE, which excludes food and energy, was higher than the expected 1.2% at 1.3%.

Personal income was also higher than expected with growth of 0.4%. The expectation was for a decline of 0.3%. The increases came from the economy reopening and many reentering the workforce. An increase in rental income contributed to the increase. The growth was offset by a scaling back of government social benefits.

July’s durable goods orders final numbers were slightly better than initially reported. Growth was adjusted upward to 11.4% from 11.2%. The growth was led by orders for transportation equipment, up 35.6%. Factory orders were also adjusted up from 5.8% to 6.4% for July.

The strength in housing continued with a pending home sales number of 5.9% for July. This month-over-month reading is higher than the expected 4.4%.

Spending on construction was relatively flat in July at 0.10%. This is lower than the expected growth of 1%, but better than the previous month’s decline of 0.48%. 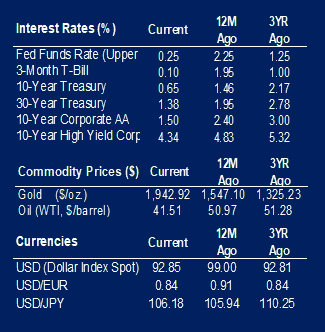 Equities posted strong moves on the week led by large caps and technology. The NASDAQ advanced 4.7% on the week, whereas the small cap Russell 2000 was down 0.7%. Emerging market equities advanced 1.8%. The U.S. dollar has had a pretty sharp decline since its March high. Still, the S&P 500 has outpaced emerging market...