Equities advanced last week over the shortened holiday week. The S&P 500 was up 2.7%, led by a rebound in the Technology sector. The NASDAQ was up 3.4% and took its cue from a decline in Treasury yields. Oil prices have been weak as of late and held back equities in the commodity space. Small caps were also soft on the week with a gain of 0.1%. Yields were down, which propelled the Bloomberg Barclays Aggregate Bond Index to advance 0.4%.

The economic data was solid for the week and seemed to be the catalyst for the stock move higher. The ISM Manufacturing Index reading of 64.7 was better than expected and posted its highest monthly reading since 1983. Later in the week the Markit US Services Purchasing Managers Index (PMI) printed its highest reading this cycle as the service sector reopens. While these are good numbers, most fail to realize that very high PMI readings are associated with below-average forward market performance. Forward returns are better with extremely low PMI readings, as we saw in March and April of last year, or a moderately accelerating economy. An economy that is accelerating too fast is likely to slow on its own or be forced to by the Federal Reserve (Fed), both of which cause forward outcomes to come in lower than expected.

The employment report was released while the market was closed on Friday. Non-farm payrolls increased 916,000 in March, which was well ahead of expectations. February was also revised up to 468,000. The unemployment rate fell to 6.0% from 6.2%. Job openings also showed a strong jump and now sit 5% above a year ago; however, the number of people employed remains about eight million below its peak.

Despite the robust data, yields were lower on the week. The 10-year Treasury was down 7 basis points to finish at 1.67%. The five-year Treasury, which is more sensitive to the timing of Fed rate hikes, jumped 7 basis points after the employment report, but then gave it all up by the end of the week. The drop in Treasury yields could be attributed to details being released regarding President Biden’s proposed $2 trillion American Jobs Plan. There is less real infrastructure spending than expected coupled with significant tax increases on both the corporate and personal side. Economic forecasts on its growth impact are therefore coming in lower than expected despite big headline numbers. 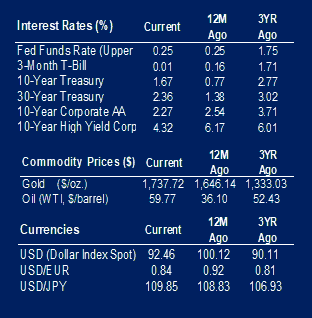 Equities continue to slide to start the year as interest rate hike expectations continue to rise. The S&P 500 was down 4.0% but fared better than the 5.6% drop in the NASDAQ. Bonds were also down on the week. After tallying things up for the year, cash is at the top of the list on...