Investors are consistently being barraged with a variety of economic and financial market data points. Whether it’s the most recent release of quarterly GDP figures or which stocks saw the biggest price moves during a specific trading session, the onslaught of information is non-stop.

Russia’s invasion of Ukraine has led to swift and significant responses from financial markets, commodity markets and numerous governmental bodies. And the push to take control of the country continues.

As economies around the globe continue to recover from the pandemic-induced downturn, one of the topics receiving an ever-growing amount of attention is the prospect for a surge in the rate of inflation. 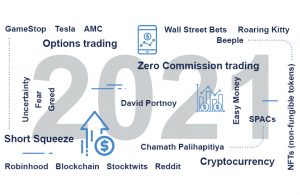 If you’ve been following the markets during the pandemic, as it seems everyone has, you know it’s been very quiet. Really nothing new happening. Wait a minute, what? Quite the opposite is true.

We all know people who have been looking for a house over the last few months. This search story is similar across the country.

Pre-2020, a common refrain was that millennials are just not buying houses.

Inflation has become the central topic in financial markets given its linkages to both bond and equity prices. It is also one of the most controversial and difficult-to-understand concepts. The Federal Reserve’s own model has been inaccurate for decades and they are now acknowledging this as they change their working assumptions.

With the run-off elections in Georgia behind us and Joe Biden’s presidential inauguration completed; investors are left wondering what the impact will be on financial markets in the new environment of Democratic control of the federal government.

With a week having passed since Election Day, it would seem the path forward, politically speaking, should be relatively clear. Americans came out in force to cast their votes as the turnout for the 2020 election was the highest seen in 50 years, and as of last weekend, Joe Biden was declared by the Associated Press to be the president-elect.

How to Measure the Market
Indexes have been a quick and relatively easy way for investors to track broad market performance since Charles Dow developed the Dow Jones Industrial Average (DIJA) in 1884.

With less than a month to go, the anxiety surrounding the presidential election is reaching fever pitch. Reflective of the highly polarized political environment we currently find ourselves in, proponents of the two major parties are working overtime to convince voters the other side will have a draconian effect on the U.S.