Equities fell sharply on the week and closed below their January lows. The S&P 500 ended the week down 5.6%. The NASDAQ has been lower for five consecutive days and recorded a 7.7% decline. Foreign equities held up better with emerging markets faring the best on a relative basis with a 3.0% decline. The Bloomberg U.S. Aggregate Bond Index was down 0.1% as Treasury yields remained elevated and corporate bond spreads widened.

The recent weakness has left the S&P 500 down 11.2% year-to-date with the NASDAQ being the laggard amid a 16.6% drop. The NASDAQ is now off to its worst start to a year since series inception in 1970.  The S&P 500 is off to its second worst start to a calendar year going back to 1941, bettering only 2009. The Bloomberg U.S. Aggregate Bond Index is down 4.2% to start to the year, which is also the worst start in series history dating back to 1976. So far, it has been a tough year for all assets.

The above numbers were as of Wednesday’s close. Overnight news of a Russian invasion into Ukraine put additional downward pressure on risk assets. Oil traded over $100/barrel overnight, which was a gain of approximately 8%. European equities traded down 4-5% while Russian equities opened down more than 45% before paring losses. Domestic markets opened down 2-3% but showed early signs of a bounce. The fixed income market is now quickly paring its expectation for a 50 basis point hike in March. The hope among analysts is that a risk-off event will limit global central bank tightening, but with oil and commodities surging this may put more pressure on the Fed to upsize hikes. It is not just oil going up. Soybeans are up 40% in three months, corn is up 25%, and lumber is up more than 100%.

The situation remains fluid with the next catalyst likely to be the global policy response to the invasion. Things that would hurt Russia the most would also inflict significant pain on Europe and to some extent the United States. There is still room for further incursion from Russia, thereby leaving markets prone to headline whipsaws. Despite difficult markets, it is worth remembering we reduced equity exposure in the second half of 2021. We also maintain a slightly more defensive posture in our base allocation. We lean a little heavier on core fixed income for times like this. We also shy away from adding risk, e.g., high yield bonds, into our defensive fixed income allocation. 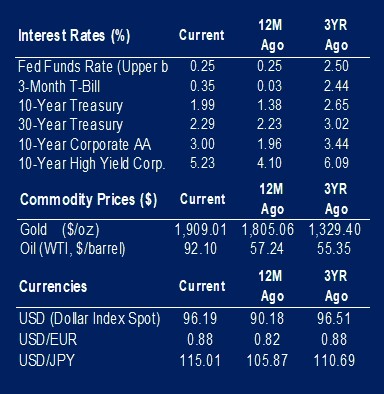