There was an increase in retail sales through April. Retailers sold 0.9% more than the previous month. Taking out autos, retail sales grew by 0.60%. The expectation was for retail sales with and without autos to grow by 1.0% and 0.30% respectively. The fastest growth in sales came from motor vehicles and parts dealers, up 2.2%. The miscellaneous store industry was up 4%. The biggest drag was gas station sales, down 2.7%. The retail sales number does not account for inflation. Considering inflation, it is likely growth is coming from price increases rather than increased sales.

There was another decline in consumer sentiment as measured by the University of Michigan. The preliminary reading of 59.1 recorded for May is 9.4% lower than the previous month. This contributes to a year-over-year sentiment drop of 28.7%, bringing consumer feelings about their economic conditions to the lowest they’ve been since 2013. The biggest weight on consumer happiness is inflation.

Building permits and housing starts numbers were lower than expected but may not necessarily indicate decreasing home prices in the future. Building permits dropped to 1.819 million in April from 1.879 million in March. The drop increases concerns that growth in the housing market is cooling. Housing starts were also down for the month at 1.724 million, versus the previous month’s 1.728 million. The decline may be a factor of builders slowing down and completing the work they have started. Backlogs in home construction are historically high. Increasing prices and lack of availability of materials has put additional pressures on homebuilders. The slowing rate of permits is not necessarily indicative of slowing demand in housing. The expectation is for first-time home buyers to feel a pricing squeeze as supply continues to lag demand.

According to the Business Inventories Index, inventories were up 2.0% in March. The Index, which is usually a month and a half behind, has been considered a leading indicator of economic activity. It looks like companies were increasing inventories in March in anticipation of higher sales. 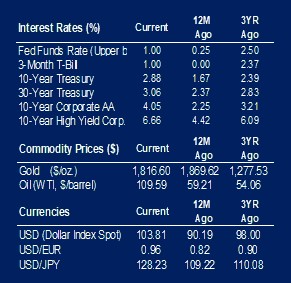