Equities traded lower to end last week but staged a rare 5.7% surge over two days. The spark was ignited by extremely oversold conditions and the Reserve Bank of Australia increasing rates by only 25 basis points. This pivot, combined with the Bank of England last week, got markets to jump to conclusions the Fed may not be far behind. It was the largest two-day rally since April 2020. The NASDAQ 100 had every component up on a single day for the first time in about 10 years. The S&P 500 finished the week up 1.7%, but foreign equities fared better with the dollar coming off its highs. Emerging markets were up 3.9% and foreign developed markets traded higher by 4.6%.

The Reserve Bank of Australia raised rates by 25 basis points, surprising markets which were forecasting at least 50. Their entire yield curve dropped 30 basis points on the day and sparked lower rates across the U.S. bond market as well. This in turn propelled equities to a huge two-day move. This kind of narrative shift can be powerful when markets are extremely oversold and bearish sentiment is high. But it also turns good economic news into bad news for the equity market and vice versa.

Equities would recover most of the losses by the close following the ISM Services release, but the reaction function was clearly visible. We end the week with key employment data. Jobless claims have fallen back to very low levels and an uptick might initially be received favorably by equity markets. The employment report on Friday may be a market moving event that aligns or contradicts the potential Fed pivot narrative.

Earnings season is just getting started, but it is expected to be a key catalyst for equity returns in the coming months. The estimated growth rate for domestic large cap equities is 2.9% in the third quarter. There have been four S&P 100 companies that have reported so far and three of the four saw their stock prices gap lower after results. 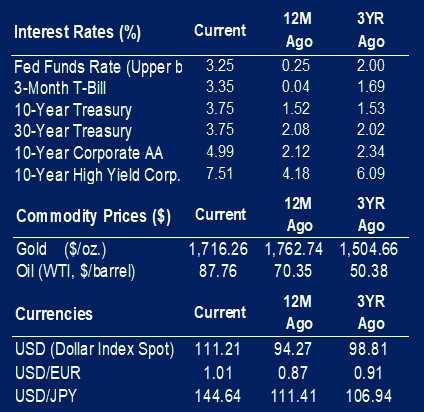 Stocks Surge on Lower Inflation Equities surged last Thursday when the Consumer Price Index (CPI) came in lower than expected. The S&P 500 jumped 5.55% on the day, the largest single-day gain since March 2020. The NASDAQ’s 7.4% gain was the 14th largest in the 50-year series history. The 13 larger daily moves all occurred...