This week saw a strengthening housing market. In August, there were 1.011 million new home sales, which is 4.8% higher than in July. The expectation was for sales of 887,500 new homes. Pending home sales grew by 8.8% in August, which compares with the expected growth of 3.2% and the previous month’s growth of 5.9%. The issuance of building permits was slightly higher than expected in August with 1.476 million permits issued compared to the previous month’s and expected number of 1.47 million. The growth in housing has been attributed to the low interest rate environment. According to Freddie Mac, the 30-year fixed rate mortgage weekly average bottomed at 2.86% on September 10. Mortgage rates have not been this low in the 50 years this number has been tracked.

Durable goods orders were up 0.40% in August. This preliminary reading is lower than the expected growth of 1.5% and significantly lower than last month’s 11.7%. However, this is the fourth month of consecutive increases. The increase was led by orders for machinery, which was up 1.5% to $31.2 billion.

We continue to see indications of strength in manufacturing. The Kansas City Fed Manufacturing Index number for September is 11, which compares favorably with the expected 8.5. The Dallas Fed Index came in at 13.6, better than the expected 8.5. Chicago PMI was at 62.4, a significant increase from the previous month’s 51.2.

Consumer confidence shot up in September, as measured by the Conference Board. The reading of 101.8 was significantly higher than the expected 88.5 and the previous month’s 86.3. The jump comes after a decline in August. 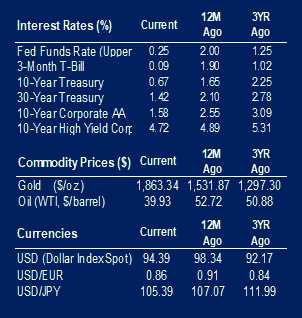