Forecasts for a repeat of 1970s-style surging bond yields and inflation are becoming quite common. And many more suggest a similar path although with a more muted magnitude. It is our expectation that by the end of 2022, you will hear less of these forecasts. The simple reason is that the bond market leads inflation, and it has been made clear based on available information we should be more concerned with a deflationary growth scare in 2022.

The U.S. economy entered a recession in December of 1969, but you wouldn’t know this by looking at CPI, which is a lagging indicator. The recession would last most of 1970 and you can see bond yields falling throughout despite still high CPI readings. Finally, the inflation readings would plunge, but the bond market again correctly sniffed out the coming surge in the labor force, commodity shortages, and large deficits. Bond yields never made a lower low in this recession and were moving substantially higher well before CPI spiked in 1974. As an aside, all five recessions since 1980 have resulted in a new low in the 10-year Treasury yield. 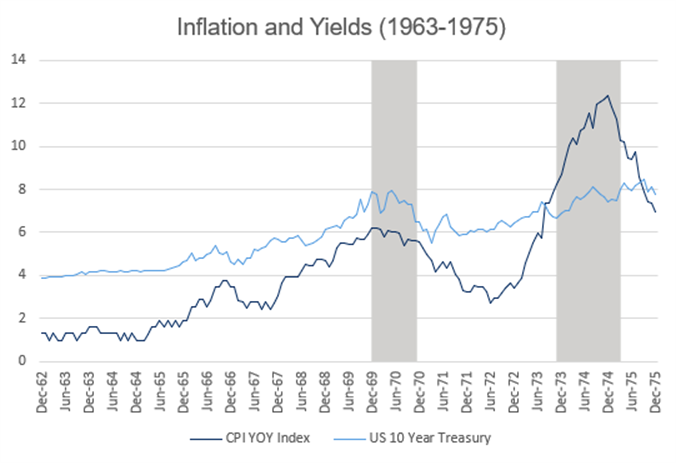 Below is the current situation where we have core inflation pretty much double the fifteen-year average and the 10-year Treasury yield well below average. You can also see that inflation is ticking up to make new highs in recent months whereas the bond market set a lower high in October. This doesn’t mean yields can’t move higher in 2022, but a repeat of anything like the 1970s has a very low probability given the historical track record of the bond market in forecasting inflation. 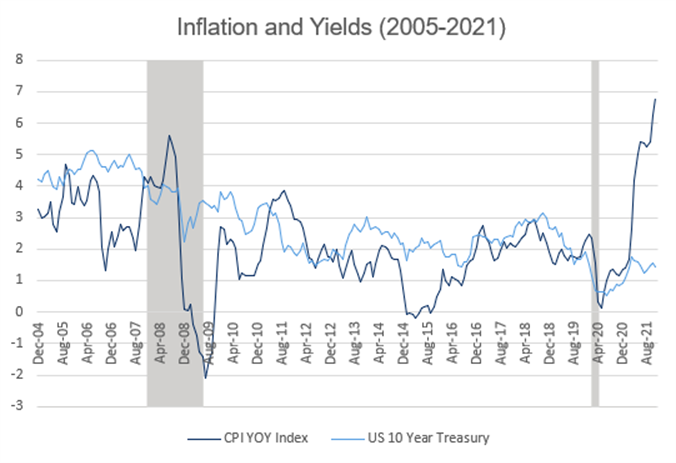 Three Strikes and You’re Out

We would also push back against the narrative that once supply chains resolve themselves that an economic boom is poised to ensue. The market is anticipatory and lagged data is far less important than how policy makers respond to this data. This is known as the reaction function. There are three big reaction functions taking place currently that will shape how markets perform in 2022.

The first reaction function is that of government-to-virus headlines. As we continue to go down the Greek alphabet there continues to be no deviation in the virus reaction function. The latest mutation once again showed many large global economies default to lockdowns and restrictions whenever there are increasing cases or the threat of them. Since the virus can be spread through animals its eradication is all but impossible. Therefore, more variations in 2022 with ensuing lockdowns pushes the global growth curve downward.

The second reaction function is fiscal stimulus, both domestically and globally. The United States is facing a significant fiscal cliff with government spending dropping significantly. Estimates are about 2.5% of domestic GDP will come off in 2022 versus 2021 just due to less fiscal spending. China is facing a severe slowdown amid a property bust. They recently enacted some modest easing measures to help mitigate the pain. It remains a question whether they will provide enough to offset their own shortfall, but there is no indication China is ready to inflate the global economy as they did after the Global Financial Crisis with huge amounts of stimulus.

Lastly, and most importantly, we have the Fed’s reaction function. The latest plot twist has Federal Open Market Committee (FOMC) Chair Jerome Powell pivoting to a hawkish rhetoric when speaking in front of the Senate Banking Committee. This helped set markets into a bit of a sell-off with the speculative equities coming under heavy selling pressure. These are the types of investments that tend go down 50-80% when easy money dries up. This pivot is likely driven by politics, as blame for inflation must fall somewhere, and it is standard for elected officials to put such blame anywhere but upon themselves.

We expect Chair Powell to talk tough on inflation and sound extra hawkish whenever speaking in front of Congress. This should keep yield curves flat, and they may flatten more should economic data decelerate. The question is will they follow through with tough talk throughout the taper at each opportunity or will they talk tough in front of Congress, but back off during FOMC meetings and other prepared remarks. By pivoting hawkish, the Fed created a window to be “less hawkish” at times, thereby helping bid up risk assets just enough to keep a back and forth. Conversely, hammering home a desire to raise rates as fast as possible will be a big headwind to equities and corporate bonds as yield curves would resume their flattening cycle.

At this juncture, we have three reaction functions all pointing to lower growth and less policy support. This is supportive of long-end Treasury yields remaining low. We would expect the hawkish pivot by Chair Powell to persist at least into the second quarter of 2022. He doesn’t want to flip-flop too much. However, we do think they will sprinkle in enough “less hawkish” remarks to keep markets from melting down like they did in the fourth quarter of 2018. However, this pivot does put the strike price much lower when it comes to adding support. Therefore, should markets start to disfunction, the Fed may not be coming to the rescue until there is a lot of pain being felt.

The market is pricing at least two hikes in 2022. Often forgotten is the fact that much of the rest of the world has been in a hiking cycle for several months. This will be felt with a lag, especially amid decelerating global growth. Below is a graph depicting the percentage of global economies whose leading index is higher versus three months ago. As you can see, the global economy is clearly decelerating. But more importantly, the three key reaction functions detailed above don’t do anything to change the current trajectory.

We would lean to less interest rate hikes in 2022 than the market is pricing in and expect another Chair Powell pivot as the taper reaches its conclusion. We would not be surprised to see zero interest rate hikes in 2022. The Fed has learned it is better to be pre-emptive than reactionary when it comes to policy support. Recessions have recently been shown to permanently alter the growth trajectory over the ensuing decade and labor force dynamics are severely impacted. If they intend to do whatever it takes to support full employment, which we think they do, we don’t expect them to squeeze markets via interest rate hikes into a flattening yield curve to the same extent they have in the past. The bond market probably sniffs this out ahead of time and long yields may bottom in the first quarter as a dovish pivot should see the yield curve steepen.

We would be wrong if global growth is accelerating again by mid-2022 and the yield curves remain sufficiently steep. This would give the Fed a window to raise rates and they would certainly take it as long as markets remained calm enough for them to do so. We do think it will be the markets giving the all-clear signal and the Fed will be following their lead, not the other way around.

Back to 2022 Economic Themes

Now that 2022 has arrived, there are several economic themes worth monitoring. Specifically, our team plans to watch inflation, employment and interest rates as influential economic themes in the new year. Please find articles on each of these themes below outlining their potential economic impact in 2022.   Transitory-ish As inflation measure climbed over 2021...

As inflation measures climbed over 2021 to levels not seen in decades, there was a rush by some to project the heightened levels would continue into the foreseeable future. Even Federal Reserve Chair Jerome Powell and Treasury Secretary Janet Yellen recently stated the term “transitory” should be retired when discussing the outlook for inflation in...

Employment will be a major theme influencing investment markets in 2022. Tighter job markets have the potential to influence companies’ earnings negatively. The impact could range from increased product costs associated with lack of labor supply to increased labor costs from companies paying higher wages to attract employees. Tightness in job markets may not be...