Preliminary U.S. GDP numbers for the second quarter were released this week. U.S GDP declined by 32.9%. This officially puts the United States in a recession if you go by the 1974 rule of thumb definition established by former Bureau of Labor Commissioner, Julius Shiskin. He defined a recession as two consecutive quarters of negative GDP growth. I think, for the most part, we knew we were in a recession, this just provides confirmation. The quarter-over-quarter decline is the largest seen since record keeping started in 1947. The positive contributors in the quarter were increases in federal government spending and a reduction in imports, which adds to GDP. The decreases were led by reductions in personal consumption expenditure (PCE), exports, private inventory investment, nonresidential fixed investment, residential fixed investment, and state and local government spending. Somewhat positive news from the announcement was the negative growth of 32.9% was not as bad as the initial estimate of -34.5%.

PCE for the last month of the second quarter was better than expected at 5.6%. The expectation of growth of 5.3% came after significant declines in the previous two months. Personal income, on the other hand, decreased by 1.1% in June. Reductions in stimulus checks due to the COVID-19 pandemic contributed to the month-over-month decrease.

Durable goods orders were better than expected in June. The 7.3% growth seen in the month compares favorably with the expected 6.2%. We have now seen two consecutive months of growth for new orders. In May, new orders grew by 15.1%. The increase was led by transportation equipment orders.

A sore spot this week was the ADP employment survey. The report showed payrolls increased by 167,000. This is significantly lower than the expected increase of 1.2 million. Companies using up Paycheck Protection Program funds likely contributed to the significant reduction. Last month, 4.3 million jobs were added to payrolls. 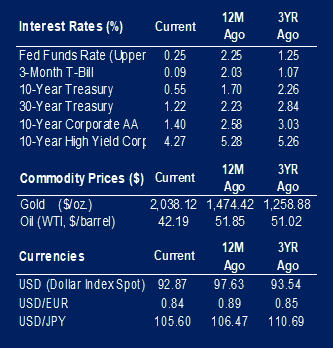 Retail Sales Increase There was an increase in retail sales through April. Retailers sold 0.9% more than the previous month. Taking out autos, retail sales grew by 0.60%. The expectation was for retail sales with and without autos to grow by 1.0% and 0.30% respectively. The fastest growth in sales came from motor vehicles and...

Sharp Reversal Sends Risk Assets Lower The massive rally post-Federal Open Market Committee meeting last Wednesday turned out to be a head fake. This week saw significant losses in risk assets. The S&P 500 was down 8.5% on the week with losses more extreme in higher valuation and cyclical companies. The Russell 2000 was down...

The Fed Hikes Rates by 50 Basis Points for the First Time Since 2000 The S&P 500 ended the week up 2.8%, with all the gains coming in the last two hours on Wednesday. Stocks surged mid-way through the Federal Open Market Committee (FOMC) press conference after Chair Powell indicated that 75 basis...