The S&P 500 finished the week up 1.1% and outpaced emerging market equities. Small caps cooled and the NASDAQ led the week. The Bloomberg Barclays Aggregate Bond Index was down 0.2%. The small cap Russell 2000 Index was up 18.4% for the month of November. It was the largest monthly gain since the index was constructed in 1984. The Dow Jones Industrial Average gained 12.1% on the month and logged its largest monthly gain since 1987. The big moves are generally attributable to a string of positive vaccine headlines that caused a rush into equities that had been forgotten and rated low on momentum rankings.

The Conference Board Consumer Confidence Expectations Index came in at 89.5, which was a notable drop from the previous month. The Expectations Index has been consistently falling relative to the Present Situation Index. This usually leads to flattening in the Treasury curve, whereas analysts all appear to be suggesting a rising 30-year Treasury yield will lead to curve steepening. The market is pricing rising inflation expectations in anticipation fiscal stimulus will fuel inflation. One measure is the 5-year inflation expectation rate looking five years forward, which is now at 2.29%. This was the indicator’s first new high since 2016, which included the last presidential election and anticipation of fiscal policy initiatives. It seems to be forgotten that almost every election is followed by fiscal expectations of some sort. The 2016 peak in inflation expectations quickly reversed course and fell until it bottomed in the March recession.

The market could be again getting ahead of itself regarding a sustained upturn in inflation as stimulus pulls forward future demand. This theme has played out over several decades since the former Federal Open Market Committee Chair Alan Greenspan used Federal Reserve tools to support asset prices. Some notable economists have opined this will continue to play out absent debt write-offs, which are being speculated about but have not been passed in any form. This would suggest Treasuries, especially the longer-dated variety, can still offer diversification benefits.

Personal income was down in October and missed expectations. Spending held up as savings was again drawn down. The savings rate as a percentage of disposable income spiked to an astounding 33% in April but has come down to 13.6% in the latest reading. Still, this is significantly higher than the 50-year average and should sustain consumer spending for several more months. 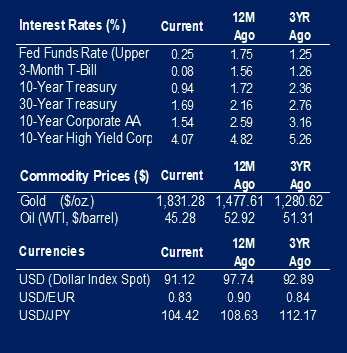 Data from the Employment Survey for May was released this week. The job market continues to be tight. Nonfarm payrolls increased by 390,000 and payrolls were up 65,000 more than expected. Much of the growth is coming from leisure and hospitality, professional and business services, and in transportation and warehousing. The growth in leisure and...