Equities End the Year on a Sour Note

Equities were down on the week as December will once again disappoint consensus expectations. The narrative was spun that December is historically one of the best months of the year from an equity performance standpoint and therefore we should expect a sharp year-end rally. Not only this, but many were anticipating an even larger than normal rally given the bearish sentiment. The reality is that in bear markets December performance is far behind what we should expect during bull markets.

For the week, the S&P 500 was down 2.5% while the NASDAQ was down 4.6% as heavyweights start to show weakness. Core fixed income was down 1.2% with bond yields beginning to move up again. Month-to-date, the S&P 500 is down 7.2% and the NASDAQ down 10.9%. Since 1950, only 2018 saw a worse December performance for the S&P 500 through this point in the month. It is on pace to post the second-worst December performance in more than 60 years. The NASDAQ is already pacing for its worst December on record.

Equities were highlighted by the continued waterfall decline in Tesla. The stock dropped 18% on the week and is now down more than 70% from its all-time high in just over a year. All eyes now turn to Apple, which had been the best performing stock among big tech. Through October, Apple was more than 4% ahead of the S&P 500. Since then, the stock has lost 15% relative to the S&P 500.

China’s U-turn on COVID remains front and center regarding global markets. In a matter of days, they went from full lock downs with extreme draconian measures to fully reopening. The initial view was that this would cause a large jump in the prices of commodities and be a tailwind to earnings for the S&P 500. Then, reports of extreme infection rates made the reality a lot more dire. So dire in fact, that optimism arose on mass natural immunity being achieved quickly. However, this was followed by news of flight restrictions, which put a negative spin on things. The ultimate outcome remains quite uncertain and optimism regarding China is likely to ebb and flow.

China has also made a commitment to offer more support for their battered real estate industry to go along with removing some aggressive curbs on technology. Some measures of liquidity show a large jump in recent weeks, which generally tends to be a positive tailwind for global risk assets. Will China be able to support global markets as it has in recent global recessions? We’ll have to wait and see. 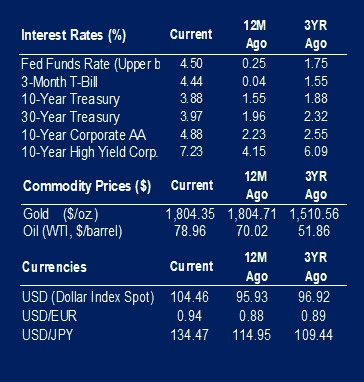 Source: BTC Capital Management, Bloomberg LP, FactSet, Refinitiv (an LSEG company).
The information provided has been obtained from sources deemed reliable, but BTC Capital Management and its affiliates cannot guarantee accuracy. Past performance is not a guarantee of future returns. Performance over periods exceeding 12 months has been annualized.