We saw a significant increase in prices in January. The Consumer Price Index (CPI) was up 7.5% year-over-year. Over the month, CPI was up 0.6% from December. Increases in food, electricity and shelter were the largest contributors to the rise in prices. Excluding food and energy, CPI was up 6% over the year and 0.6% over the month. Energy has been the biggest increase over the year, up 27%. This jump in prices also increases the chance of larger than expected action from the Federal Open Market Committee (FOMC). The probability of a 50 basis points increase in March is up to 46%.

The Producer Price Index (PPI) also saw a significant increase in January. Over the month, there was an increase of 1% in producer prices. This is 0.50% higher than expected. This jump contributed to an annual increase of 9.7%.

Growth in wages was negatively impacted by inflation in January. Before accounting for inflation, hourly earnings were up 0.7% over the month and 5.7% over the year. There was a marginal increase of real earnings, after the impact of inflation, of 0.1% over the month. Over the year, there was a pretty sharp drop in real earnings of 1.7%. We will likely see increases in wages throughout the year to account for rising price levels.

Retail sales for January were the strongest they have been since March 2021. Sales were up 3.8% from December to January. This blows the expectation of 1.9% out of the water. Growth was led by increases in autos, furniture and building materials. Excluding autos, retail sales were up 3.3%. However, the retail sales number is not adjusted for inflation, therefore higher prices likely contributed to the increase.

Consumers are feeling less optimistic according to The Michigan Sentiment reading of 61.7 for February. This is an 8.2% drop from the previous month. And this is the lowest sentiment has been since November 2011. The decrease in sentiment has been negatively impacted by increasing price levels. There are indications consumers are weary of the impact increasing prices have on their financial situation. The sharpest decrease in sentiment came from households with incomes over $100,000, for this group sentiment is down 16.1%.

News on the Russian/Ukrainian crisis has had adverse effects on markets. The S&P 500 was down 2.40% this week. 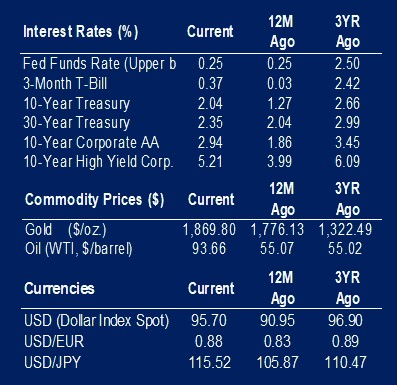