Equities remain weak to begin the year, although they managed to bounce back to end the week green. The S&P 500 was up 0.6% with identical gains seen in the NASDAQ Composite. Oil and natural gas indices were up about 8% on the week with bank indices up about 5%. Over the last year, the First Trust Natural Gas Index is up 83.8% compared to a decline of 9.9% in the Russell 2000 growth. It is another example to fade consensus narratives and crowded positioning.

The Bloomberg Barclays Aggregate Bond Index is off to its worst start to a year since at least 1988, which is as far back as our database goes. The entire Treasury curve has shifted higher by 15-25 basis points in just the first two weeks of the year. Federal Open Market Committee meeting minutes from December were again very hawkish and set off the latest move. The market is now pricing in a greater than 90% chance of a rate hike in March and almost four hikes over the course of the year.

The ISM Services posted a 62 reading, one of the highest in the data series that goes back to 1997. The bad news is that the 10-point drop from the previous month is the largest ever outside of recessionary periods. Nonfarm payrolls missed by quite a bit at 211,000 net adds versus the expectation of 450,000. The narrative remains somewhat bullish as commentary shifted to the favorable Household Survey which showed 651,000 jobs created and an unemployment rate of 3.9%. Also, this month ADP private payrolls were reported up 807,000. All these series are subject to years of revisions, and we can see they don’t exactly send a consistent message. Despite this it remains one of the most anticipated economic data reports of the month.

Consumer credit was reported this week and exploded for the month of November as the data is reported with a lag. The surge could be attributed to the savings buffer being gone or because consumers are so optimistic. It is hard to assume the latter when sentiment surveys consistently show extreme consumer pessimism. Total credit had its largest monthly annualized gain since 2001. Revolving credit surged 23% on an annualized basis, the largest since 1998. Potentially related is the fact that real wages have been negative for nine consecutive months as the Consumer Price Index came in at 7.0% versus the prior year. 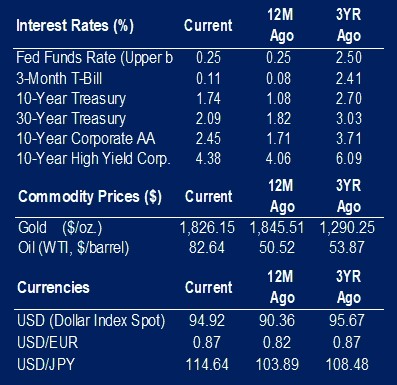 Employment Employment data was at the forefront of this week’s economic calendar. Despite concerns regarding an impending recession the employment picture continues to be resilient as the unemployment rate remained unchanged at 3.7%. Non-farm payrolls rose by 263,000, higher than the forecasted increase of 200,000. In addition to the above expected level of job growth,...