Domestic equity markets were up on the week as the second quarter ended. The weekly gain in the S&P 500 was 2.2% and helped bring the quarterly return to 20.5%. Foreign equities were negative on the week and continue to underperform domestic equities. The Bloomberg Barclays Aggregate Bond Index was up fractionally, and gold prices hit their highest level since 2013. High growth stocks continue to power ahead despite historical extremes in valuation. One example is Shopify, which has become a household name and trades at roughly twice the valuation of the high-flying internet stocks in the tech bubble of 2000. Tesla also became the most valuable car company in the world this week.

Economic data continues to be positive at the margin as the stimulus efforts work their way through the system. Durable goods orders for May jumped 15.8% and helped drive the year-over-year number to sequential improvement. Initial jobless claims were 1.4 million and remain elevated. Personal income was down 4.2% after the huge surge from government transfers in April. A continued downward move in the coming months would question the sustainability of the recovery. On the plus side, pending home sales surged 44%, which was about four times higher than any reading in the series history dating back to 2001.

The ISM manufacturing report was better than expected with new orders well ahead of inventories. This is normally suggestive of solid economic expansion in coming months. A rather stunning release was the ADP private payroll revision for April, which went from -2.7 million to positive 3.1 million. It looks like it remains good policy to be careful making assumptions on data that can be revised. S&P 500 equity futures fell about 1% following the negative ADP number last week before rallying. As the saying goes, “price is king,” and the market quickly brushed off the headline.

The Federal Reserve (Fed) along with fiscal policy remain the elephants in the room. Federal Open Market Committee minutes from their June meeting were released this week. The Fed acknowledged downside risks from fiscal policy, which could be underappreciated by the market. They punted on yield-curve control at this meeting and instead wanted to emphasize their focus on forward guidance. The new saying is that they are “not even thinking about thinking about raising rates.” The market believes them with the 5-year Treasury trading at 0.31%. 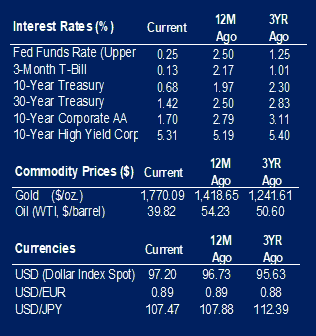