A big economic number this week was the Retail Sales report for February. The decline of 3% comes after a strong January number of 7.6%. The decline, which was larger than expected, could be a function of more moderate sales after January’s bump from the second round of stimulus checks. The largest decline came from areas greatly impacted by discretionary spending – sporting goods, hobbies, musical instruments, and bookstores. This category declined by 7.5% in the month. However, over the one-year period, the category is up by 15.4%. There was also a decline in general merchandise stores, down 5.4%. And motor vehicle sales and parts dealers dropped 4.2%. An increasing fringe concern is that stimulus checks may not be enough to keep the economy going; that the cycle of growth spurts and then dies without added stimulation. We have seen positive bumps in economic growth after the payments. However, the expectation is for the bumps to eventually be self-sustaining. Stimulus leads to more spending, which leads to more production, which leads to more jobs, which leads to an unending cycle of growth.

Distribution for the third round of stimulus checks has begun. Due to this, we expect to see increased discretionary spending over the next few months.

Consumer confidence in the economy is increasing. The Michigan Sentiment Index reading for March of 83 is higher than the expected 80 and the previous month’s 76.8. This is the highest level in a year. Sentiment improved across all major socioeconomic subgroups. The largest gains came from households in the bottom third of the income distribution.

Federal Reserve Chair Jerome Powell indicated this week that Fed rates would likely not lift off from near zero before 2024. Which is basically the same message from December. Chair Powell said the Fed intends to keep providing support for the economy for as long as it takes. The Federal Open Market Committee vote to keep rates where they are was unanimous.

Equity markets recorded strong performance this week. The S&P 500 was up 1.97%. This brings year-to-date performance to 6.61%. Markets traded down and were virtually flat for the year on March 4. However, we have seen a strong bounce since then. 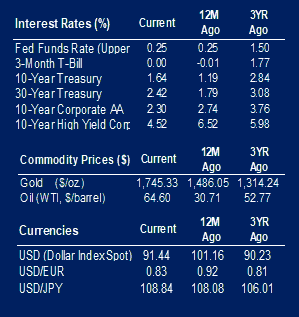 The 2021 second quarter earnings season has started out strong. So far, 20% of S&P 500 companies have reported and earnings and sales growth are coming in a lot stronger than expected. Earnings have grown over 100% from the second quarter of 2020. The growth has been led by the Financials sector as they benefit...

The S&P 500 inched up to again make a new all-time high led by tech mega-caps. Small caps were down 2.2% and continued their notable underperformance of late. Emerging markets remain down on the month but are not faring as bad as domestic small cap equities. Large cap domestic stocks continue their secular outperformance versus...

We were blessed with the largest nonfarm payrolls increase in 10 months in June, with 850,000 jobs added. We also saw unemployment increase from 5.8% to 5.9%, however this is not a bad sign. The increase is attributed to more people on the sidelines starting to actively look for jobs. And since individuals not actively...