Last Wednesday China made comments that it intends to keep capital markets stable and support overseas listings. It was deemed to be similar in nature to European Central Bank President Mario Draghi’s “Whatever it takes” speech that ended the euro crisis a decade ago. The Hong Kong Technology Index, which was down more than 65% in just over a year, would rally 22% on the day. It added another 11% this week. Given the prior sell-off in equities alongside bearish positioning, it was likely to spark a global rally. There was just one problem; in several hours the Federal Reserve was poised to raise rates for the first time in four years.

The Fed raised rates last week and was overwhelmingly hawkish. The equity market did exactly what you would expect in isolation, it fell more than 2% from the intra-day high. But the event was now over, and the market quickly judged that China’s actions outweighed a hawkish Fed. There were also no immediate risks to be hedged. And just like that the NASDAQ rose more than 7% from its low last Wednesday. Germany’s DAX Index rallied 16% in seven days to erase all loses from the Russian-Ukrainian war but gave a little back to end the week. The S&P 500 would close higher by 1% in four straight days for only the fifth time ever.

Not to be outdone, bonds would have quite a week as well, although to the downside. Federal Reserve Chair Jerome Powell made comments this week that 50 basis point hikes are clearly on the table, and it is possible they do multiple 50-point hikes. He expressed the lower probability of engineering a soft landing. Again, an extremely hawkish message from the Fed. The Bloomberg Aggregate Bond Index would finish the week down 0.3% as yields rallied Wednesday to minimize the damage. The Bloomberg Aggregate Bond Index is now down 5.8%, its worst drawdown in series history. The Index has only posted a weekly gain twice this year.

Economic data for the week was a mixed bag. Housing data was plentiful and generally came in weaker than expected. The Conference Board Leading Index was in line with expectations and showed improvement in the number of components expanding. Regional surveys of manufacturing remained solid and support a stable Purchasing Managers’ Index reading in early April. Attention remains on commodity prices as we head into next week. Despite the circular logic, governments are adopting gas stimulus checks to combat higher prices. On top of this, some European countries have hinted at nationalizing oil companies and/or capping prices. 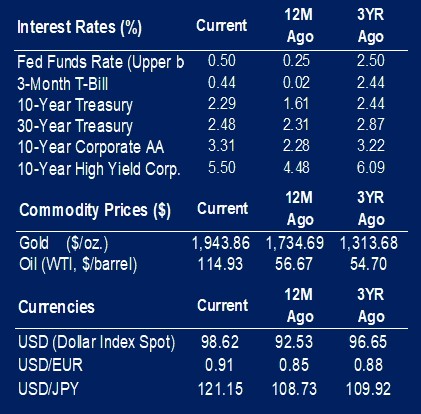