Equity markets were led by the NASDAQ this week, which posted gains of 0.8%. Under the surface there was some weakness as the Russell 2000 fell 1.6%. Emerging markets were also soft with a decline of 1.4%. The Bloomberg Barclays Aggregate Bond Index was up 0.7% and posted one of its better weeks this year. The two-year Treasury was up 12 basis points, but longer parts of the curve saw yields fall amid a bull flattener.

We remain in the heart of earnings season, with big tech leading the way. The Russell 1000 Growth Index hit an all-time high this week and brushed off the bearish sentiment that higher rates would lead to underperformance. Tesla is attempting to go parabolic again. Microsoft and Google posted huge upward adjustments to their already massive market caps after better-than-expected earnings.

The big story for the week is in bonds where central banks are revving up the hawkish rhetoric. The Bank of England got the process started a couple weeks ago. Their 2-year government bond yield hit a low of 0.03% in August and peaked out at 0.73% early this month. High Consumer Price Index readings in Australia spooked the market, causing their 3-year government bond yield to go from 0.20% to 1.10% in just five weeks. This is largest move away from the 1-year average, more than 4.5 standard deviations, in at least 20 years. Then, the Bank of Canada announced this week that their balance sheet would stop growing via quantitative easing and hinted at rate hikes in mid-2022. Their 2-year yield also put in close to a 4 standard deviation move higher and is the largest standardized move since at least 1990.

In the United States, the market has priced in two full rate hikes by the end of 2022. Moving up rate hikes with an accelerating economy is not necessarily something to be feared. However, we are at the opposite end of the spectrum with growth estimates in a sharp decline. The small business outlook regarding general business conditions as measured by the National Federation of Independent Business is at one of the lowest readings on record. The same goes for consumer expectations. The prospect of global central banks hiking rates against decelerating growth is a recipe for long duration government bonds to fall in yield. Unless inflation starts falling immediately, the Federal Reserve is going to be boxed in to deciding whether to fight inflation or make a dovish pivot with inflation at multi-decade highs. 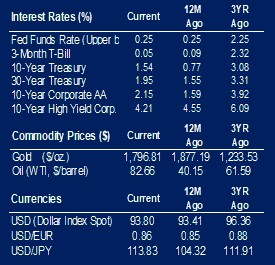