News headlines whipped the market around, but equities found a way to finish higher on the week. The S&P 500 advanced 1.7% led by a 6.9% jump in small caps. Despite political parties appearing to be further apart at the end of the week, equities gained on each headline that suggested stimulus remains open. The President suggested stimulus talks stop until after the election, which caused a sudden drop in equities on Tuesday. On Wednesday he said he was open to piecemeal options, which caused the market to gain more than it lost the day before. Thrown in the mix was news the President contracted the virus, which was accompanied by a rush of headlines over the next two days.

It was a heavy week on the economic front. Initial jobless claims came in very close to consensus at +837,000. Personal income fell 2.7% for the month of August as fiscal stimulus decelerated. Despite this, spending held-up as consumers spent previously saved stimulus money. The savings rate as a percentage of disposable income shot up to 33.6% in the aftermath of the economic shutdowns. This was almost twice as high as any month in the 60-year data series. The savings rate fell to 14.1% for August. This has allowed the economic recovery to continue despite the drop in fiscal stimulus and rise in permanent job losses. The ISM Manufacturing report was again solid as new orders continued to be strong.

The economy added 661,000 jobs in September according to the Bureau of Labor Statistics Establishment Survey. This was below consensus, but private payrolls were a bit better than expected. The unemployment rate fell from 8.4% to 7.9%. The unemployment rate is derived from the Household Survey, which showed a more modest 275,000 job additions that were offset by 695,000 individuals leaving the labor force. The labor force is down almost 4 million versus the prior year. Job openings seem to confirm the weaker tone with the first monthly drop since the recovery began.

Federal Open Market Committee minutes revealed a willingness to add more support, but a preference for fiscal support. Federal Reserve (Fed) Chair Jerome Powell spoke of the need for more fiscal stimulus and this seems to be a major talking point among all Fed officials when they make public appearances. It is such a clear need that the market assumes its inevitability despite rhetoric from lawmakers that there remains a big divide. 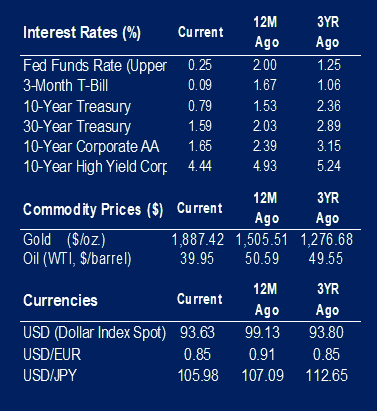