Equity markets slipped lower in the past week as early morning strength was consistently sold. Recently the Dow Jones Industry Average was down six out of seven days, but the magnitude was tame with just a 2.4% decline. Small caps have been the weakest area of the domestic market, falling 4.1% over the same span. Yields moved lower on the week, helping the Bloomberg Barclays Aggregate Bond Index advance 0.4% on the week.

With inflation being a topic of concern, the Consumer Price Index (CPI) report was the highlight of the week. Both headline and core CPI came in lower than expected. Core CPI came in at 4.0% versus the prior year and is now lower for two consecutive months. The current backdrop is one of decelerating inflation, decelerating growth, and decelerating liquidity. These all may be temporary, and the causes are often debated, but until they reverse it remains difficult to see upward movement in Treasury yields.

It was a big week for economic data out of China with retail sales and industrial production missing forecasts by a wide margin. However, the more pressing point is what appears to be a commitment in China toward President’s Xi Jinping’s idea of a “common prosperity.” We have noted the fall in Chinese stocks as well as those listed in the United States. Las Vegas Sands and Wynn Resorts were each down more than 15% this week as crackdowns reach the gambling sector. Topping it all off is the fact that the second largest property developer, China Evergrande, stopped making bond payments today, as bankruptcy appears imminent. China Evergrande was larger than Lehman Brothers. The knock-on effects are still to be determined, but China’s largest property developer was down 20% this week on contagion fears.

Normally, the markets would be in a tailspin based on the facts at hand and enormous uncertainty. This has not transpired to this point as investors appear aware that everything rolls up to the sovereign and then China can handle the fallout. They just don’t appear willing to do so at this stage. While this could take a crash scenario off the table, China attempting to manage a deleveraging of their economy would certainly be a crushing blow to the reflation trade. It is likely that China’s policy responses in the coming weeks could be the primary determinant in setting the medium-term trajectory of markets. 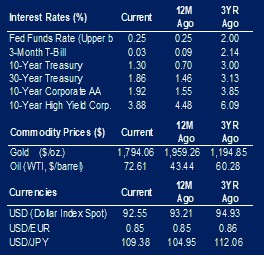 Equities Retreat to New Lows Amid Rising Bond Yields Equities traded lower this week with the S&P 500 trading at its lowest level of the year. The index finished down 1.9% on the week and is down 21.1% on the year. Emerging markets were down 6% on the week as global currency and bond market...

Focus on the Fed This week all eyes were focused on the Fed in anticipation of their rate decision. Change was expected, but would it be an increase of 75 basis points or 100 basis points, given the prior week’s report of the Consumer Price Index rising 8.3% year‑over‑year? Recall the Fed has stated its...

Sustained Volatility Market participants have been attempting to read the tea leaves, trying to ascertain positioning in the face of a very fluid macro-environment. One thing that has remained elevated is volatility. The CBOE Volatility Index, or VIX, currently stands at 26 which is above its historical average of 19.6. This is a measure of...