It has been another week with no resolution in congressional stimulus discussions. The positive economic numbers we see may have led to a false assumption the economy is on better footing than it really is. There are concerns the lack of action in relation to additional fiscal stimulus could lead to a more sustained economic downturn. Federal Reserve Chair, Jerome Powell, expects certain areas of the economy will continue to struggle without aid. His comments came on Wednesday after the release of the Federal Open Market Committee September statement. The expectation of a majority of the board is for rates to stay close to zero until 2023, at least. The discussed hurdle for lifting rates is higher than the one for previous downturns. The expectation from officials is for rates to stay low until inflation reaches 2% and unemployment is around 4%.

Initial jobless claims for the week ended Sept. 5 were higher than expected. New unemployment claims were filed by 884,000 people.  This number was in line with the previous week’s, but higher than the anticipated 838,000.

Consumer prices were higher than expected in August. Year-over-year (YOY) headline Consumer Price Index (CPI) for the month was at 1.3% versus the expected 1.2%. The numbers hide a lot of underlying price variances. The food category saw an increase in price of 4.1% YOY. Energy declined by 9% led by oil. Excluding food and energy, CPI was up 1.7% in August. Apparel and airline fares are among the biggest drags on inflation. The categories are down 5.9% and 23.2% respectively. Month-over-month, headline CPI was up 0.40% compared to the expected 0.30%, and core CPI was up 0.40% compared to the expected 0.20%.

Hourly earnings for August were up 4.7% over the previous year. As mentioned in previous Weekly Insights, this number is inflated due to a higher number of people who have lost their jobs being on the lower end of the wage scale. This has led to the average of the pool skewing higher.

Retail sales for August were lighter than anticipated. The 0.60% growth reported was less than the expected 1.1%. A contributing factor is the rolling-off of some government stimulus programs.

The S&P 500 index was down 0.35% this week. The weakness was led by the information technology and consumer discretionary sectors, down 1.56% and 1.39% this week. 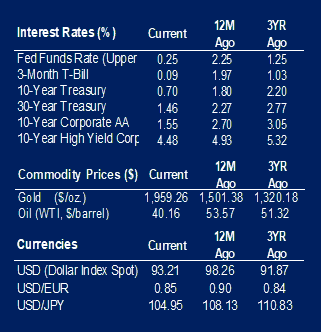 Global equities were up on the week in the range of 1-2% with broad participation across market cap and region. Stocks are now in the real “Santa Claus” rally window, which is the last five trading days in December plus the first two in January. It seems the narrative had shifted to the expectation that...