Focus on the Fed

This week all eyes were focused on the Fed in anticipation of their rate decision. Change was expected, but would it be an increase of 75 basis points or 100 basis points, given the prior week’s report of the Consumer Price Index rising 8.3% year‑over‑year? Recall the Fed has stated its goal to reduce the annual rate of inflation to 2%.

As expected, the Fed implemented an increase of 75 basis point, bringing their target range to 3.00% – 3.25%. In his comments yesterday, Chair Powell also affirmed the Fed’s intent to “significantly [reduce] the size of [the Fed’s] balance sheet.”

The yield on the 2‑year U.S. Treasury stands at 4.14%, a level last observed in September 2007. Likewise, the yield on the 10-year Treasury is 3.70%. a level last seen in April 2010. Yields on U.S. government bonds remain the highest among that of sovereign debt of developed countries.

Equity markets have declined week‑to‑date as the Russell 3000 is down 2.2% while the MSCI ACWI ex-USA Index has waned 0.8%.

Concerns may abound as to the ability of the Fed to achieve their inflation goal while avoiding a “hard-landing” given a very fluid macro-environment.

The National Association of Home Builders Housing Market Index for September modestly surprised at 59.5, versus August’s 58.2. While the U.S. Census Bureau’s August report for housing starts increased 12.2% month‑over‑month, building permits slowed during August, on a seasonally adjusted annual rate, to 1.575 million from 1.685 million in July.

Leading Indicators for August disappointed at -0.3% month‑over‑month. Yet consumer sentiment, as reflected in the Michigan Sentiment Index, increased to 59.5 during September, versus 58.2 for August. Stay tuned. 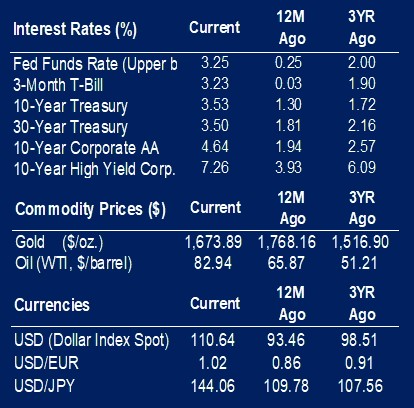