Equity markets faced selling pressure on the week as Chinese real estate issues came front and center. The third Friday of September was again weak, which set-up a gap down on Monday. The market remained resilient, however, and rallied to close the week. The S&P 500 ended the week down 1.9% and is now down 3.1% from its high on a closing basis. Fixed income failed to get a bid amid the equity weakness resulting in the Bloomberg Barclays Aggregate Bond Index finishing flat on the week.

Retail sales came in much better than expected, although were accompanied by large downward revisions to the previous month. According to the University of Michigan survey, consumer sentiment continues to languish and remains near an eight-year low. Building permits were strong on the month and are bouncing back after a material slowdown following the price spike in lumber. Lumber prices are now down more than 60% from their high earlier in the year which should help get housing new builds back on track. Still, demand far outpaces available units for sale in the single-family market and there remains a labor shortage as well. This supports higher home values as new supply won’t be too crazy in the coming months.

The Federal Reserve met for their rate decision and left rates unchanged at 0 to 0.25%. Chair Powell said the tapering is likely to begin soon, which many are interpreting as an announcement in November and action in December. He really tried hard to delineate that rate hikes won’t necessarily begin immediately following tapering, which would likely conclude in mid-2022. The Federal Open Market Committee (FOMC) forecasts were quite surprising. They downgraded GDP for 2021 but moved it all to 2022 with a big upgrade. Their inflation forecast for 2021 was moved higher, but the 2022 inflation forecast also moved higher.

In more than 12 years since the Global Financial Crisis, the federal funds rate has been at zero for 67% of the months. It remains the case that no major developed country in the modern era has been able to permanently leave the zero bound on interest rates. Amid this historical context, the FOMC maintains a longer run estimate of 2.5% on the fed funds rate. The dot-plot now shows expectations for one hike coming in 2022, which was moved up this meeting. Also, several dovish members will be replaced by known hawkish members in 2023, possibly tilting the balance just enough to pull forward rate hikes. 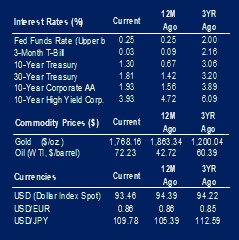