The S&P 500 and NASDAQ finished near their all-time highs after a flat week. But once again, this masks weakness under the surface. The Russell 2000 Index of small caps fell 1.6%. The Value Line Geometric Index, a proxy for the median stock performance, was down 1.3% on the week. A look around the world shows quite the divergence in equity performance. The bellwether Kopsi Index in Korea was down 1.4%. Brazil was down 5.0%, but Japan’s TOPIX Index was up 5.0% as their prime minister offered to resign. The TOPIX is now back to its 1991 level, but is still down more than 25% from its all-time high. Japan continues to offer exceptions to perceived investment clichés. In this case, the idea that equities must rise over a longer-time horizon. They also paved the way for perpetually lower bond yields and QE-infinity. Moving to a country with a more prolific demographic profile, India’s Sensex was up 1.6% on the week. The eventual leader in world population is showing some robust equity performance, now up 53% over the last year and outpacing the S&P 500 by 16%.

We previously highlighted the divergence between recent low ADP payroll data and much higher Bureau of Labor Statistics employment numbers. It was also noted ADP tends to lead despite it being disregarded of late in the media. Last Friday’s BLS payroll report quickly closed the gap to ADP by coming in well below expectations. Net gains of 235,000 were well below expectations of 733,000. The unemployment rate remained unchanged at 5.2%. Average weekly earnings were up 5.2% versus the prior year, which sounds a bit inflationary. However, real weekly earnings have fallen 2.5% over the last six months. This is lower than any point during the Global Financial Crisis and is historically associated with lower consumer buying power.

Bond yields were up after the release of the employment report because the market deemed it to be sufficiently bad that the odds of a quantitative easing (QE) taper delay went up materially. More QE and/or delays are likely to push up long-end yields, at least initially, as it is perceived this will help sustain the economic recovery. The scenario where the Fed reduces QE into a weakening economy is the one that likely sees long-end bond yields head materially lower. The FOMC meeting concluding September 22 could move the market as the Fed appears somewhat committed to tapering. Preceding this by a couple days is historically one of the worst-performing days of the year for equities, the third Friday in September, which coincides with options expiration. 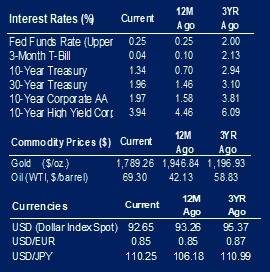