Hot Fun in the Summertime
Positive sentiment toward equities continued into August, until it didn’t. Broad equity benchmarks continued their ascent through mid‑month, which began as of the beginning of this third‑quarter. U.S. equities rose through most of the month, only to pull back from mid-month highs and end the month down 3.7%. Foreign equities also fizzled out dropping 4.7% through month‑end.

Even bonds were not immune, declining 2.7% for the month.

Muddy Waters
Investor sentiment recently changed from one of “risk‑on” to “risk‑off”. Regarding the macro view, data continues to be fluid and muddled.

Consumer spending appeared somewhat resilient. Personal income for July rose month‑over‑month by 0.2%, below expectations but positive. This translated into a rise of 0.1% in Personal Consumption Expenditures (PCE) for July. That said, the rise of 0.08% in the Core PCE Deflator for July was well below expectations of 0.30% and June’s increase of 0.61%. The broader PCE Deflator fell 0.07%. versus expectations of a 0.05% rise and was materially below June’s report of 0.96%.

Another positive was the upside surprise exhibited by the Index of Consumer Sentiment from the University of Michigan. The final report for August was 58.2, well above consensus expectations of 55.2 and July’s 55.1.

With all this positive news, why the retracement? Questions abound as to inflation, specifically peak inflation in the U.S. and the outlook for the economy. These same concerns exist outside the United States.

Inflation remains top of mind to the Fed. At last week’s Jackson Hole Economic Symposium, Chair Powell reiterated the goal of the Federal Open Market Committee to “bring inflation back down to our 2% target”. He further stated that “July’s increase in the target range was the second 75 basis point increase in as many meetings, and I said then that another unusually large increase could be appropriate at our next meeting.” These comments specifically resulted in a rise in yields and a fade in equity markets.

Thus, it seemed that investor sentiment for August could be summed up as “the thrill is gone”.

Do You Remember?
As we move into September, a few things warrant consideration. The Atlanta Fed’s GDPNow model currently projects third‑quarter GDP to grow 2.6%, up from 1.6% on Aug. 26. And while analyst revisions for third-quarter earnings have been tempered, according to Refinitiv, analysts are currently projecting growth in both revenues and earnings of 9.9% and 5.3%, respectively. Equities have been positive quarter‑to‑date. As Justin mentioned in last week’s Insight “… should stock prices break higher, many funds will be offsides and the chase may see another run of strong gains.” 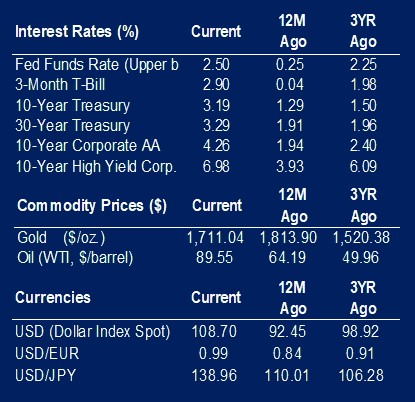