Equities continued to run as we hit the middle part of the month. The S&P 500 added another 1.2% for the week. Emerging markets were up 2.4% and even bonds advanced as the Barclays Bloomberg Aggregate Bond Index gained 0.6% on the week. The feared rebalancing and tax-loss selling never materialized, as the S&P 500 has gone over a month without back-to-back down days.

Non-farm payrolls were released late in January and advanced 145,000 versus the prior month. Weekly earnings have been rolling over significantly in recent months, but the unemployment rate remains unchanged at just 3.5%. Consumer price inflation was up 2.3% versus the prior year, but this was slightly short of expectations.

The United States and China finally signed a trade deal of sorts. Tariffs will remain for a chunk of Chinese goods and China will buy more U.S. products. The rest remains vague based on the language used and it is easy for either party to back out of the agreement. Maybe the biggest market moving factor is the currency agreement whereby the United States hopes China strengthens their currency. A weaker dollar is very important to alleviate some of the near-term stresses and imbalances in the global system. The Chinese currency has strengthened more than 4% over the last several months. Instead of a “sell the news” event, they leave open the prospect of a phase two agreement to pump the market as needed.

Earnings season is getting underway despite being a bit under the radar. According to Factset, fourth quarter 2019 earnings are expected to decline 2.0%. If realized it would mark four straight quarters of year-over-year earnings declines. We only have a sliver of companies reporting, but thus far they are beating the low expectations on a consistent basis. For this year, analysts have once again penned the usual 9-10% earnings per share growth number. However, 2018 was one of the rare years where earnings estimates moved higher throughout the year, yet the equity markets finished negative. Last year saw this number come down hard from 10% toward 0%, yet equities were up 30%. The key difference in the two years was the Federal Reserve (Fed) tightening versus cutting interest rates. Thus, earnings are flying under the radar as markets focus on the Fed and how their temporary repo market operations that began in September become more permanent by the day. 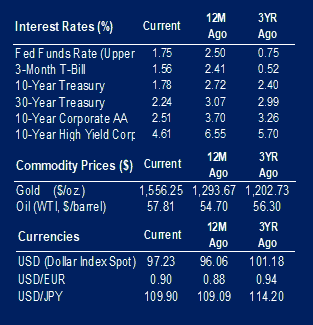