Equities recouped early losses in the week to end mostly in the green. The S&P 500 was down fractionally, but the NASDAQ was up 0.5%. Small caps outperformed with a gain of 2.7% and emerging markets also fared well with a 2.2% advance. The Bloomberg Barclays Aggregate Bond Index was down 1.2% as yields make a material move higher in recent days. The bond index is down 3.2% in 2022, making it the worst start to a year going back to index inception in 1976.

Bond yields came under pressure following hawkish actions from the European Central Bank (ECB) and Bank of England (BOE). The BOE increased interest rates a quarter point but had four of the nine voters favor a 50-basis points (bps) hike. The ECB followed suit with very hawkish comments. They were not expected to raise rates in 2022 but noted a unanimous concern about inflation. This prompted about a six standard deviation move in European front-end rates that filtered through to their longer duration bonds and ultimately into the U.S. rates market. Developed central banks are going to be forced to follow the Fed, at least directionally, or else risk their currencies appreciating and the knock-on of slower growth. The amount of negative yielding debt globally has been cut in half in just two weeks and nearly by two-thirds in six weeks. As this happens there is less urgency to invest in U.S. Treasuries, despite still higher yields, given the ease to invest locally if yields are positive. At the margin this pushes U.S. rates higher.

Economic data was highlighted by the Bureau of Labor Statistics monthly jobs report that showed a gain of 444,000 jobs in January. The expectation was a negative number. This sent equities on a big rally that carried over into this week. We don’t normally highlight Thursday’s economic data but given the heightened presence on the Consumer Price Index (CPI) report we can make an exception. CPI came in at 7.5% versus the prior year while core was at 6.0%. Both numbers exceeded expectations. Bond yields popped higher, and stocks reacted lower. Now the bond market is pricing in a greater than 85% chance of 50-bps hike in March. A prominent Fed official said today that they favored a 50-bps hike and getting to 100 in three meetings. Then, two-year Treasuries jumped 24-bps on the day, their largest single day move since 2009, and 10-year Treasuries closed above 2% for the first time since 2019. 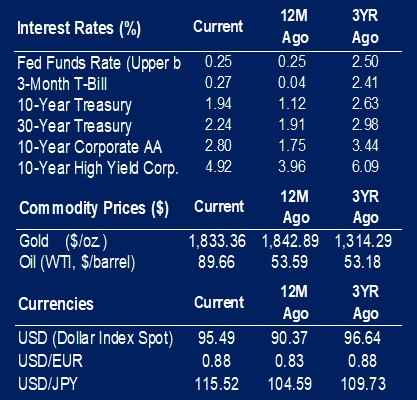