Equity markets bounced back this week as the United States continues to outperform the rest of the world. The S&P 500 was up 5.5% and domestic small caps jumped 9.3% on the week. This outpaced gains of 2-3% among foreign emerging and developed markets. Much of the rally was aided by news regarding favorable vaccine results, although the robustness of the results has since come under critical review. Corporate bond spreads rallied after weakness in recent weeks and resulted in the Bloomberg Barclays U.S. Aggregate Bond Index gaining 0.5% on the week.

Despite the gain this week, the S&P 500 is roughly unchanged from its level in late April. Technology stocks have continued to shoot higher as lockdown has accelerated the digital transformation in both consumer and enterprise settings. Offsetting this continues to be weakness among financials. This flows into the small caps as well, which have been notable laggards for several years. The Russell 2000 Index has only managed to average a 2.8% annual gain over the last five years whereas the NASDAQ has averaged 14.3% and 30-year U.S. government bonds have averaged 7.2%.

The push toward negative interest rates continued as the United Kingdom sold three-year government bonds with a negative yield for the first time ever. The Federal Reserve in recent commentary has suggested a strong desire not to endeavor below the zero bound; however, they did not completely rule it out. Fed fund futures imply a slightly negative interest rate by year-end. The Federal Reserve prefers to use the balance sheet, which is now at $6.9 trillion versus $4.1 trillion at the end of February.

The rhetoric on China remains strong and now concrete actions are taking place. There has already been a strong push to remove all investment in Chinese companies from government pension funds. This week the Senate passed legislation that would boost the oversight of foreign companies listed on U.S. stock exchanges. Companies would also need to certify they are not owned or controlled by a foreign government. Failure to do so could lead to de-listing from U.S. exchanges. This follows on the heels of a high-profile Chinese stock fraud, Luckin Coffee, that was highly touted by the financial media. This stock has seen a total wipe out in the last several weeks following release of the news. There are several widely owned U.S. and Chinese stocks that could be prone to a shock if retaliatory actions enter a feedback loop. 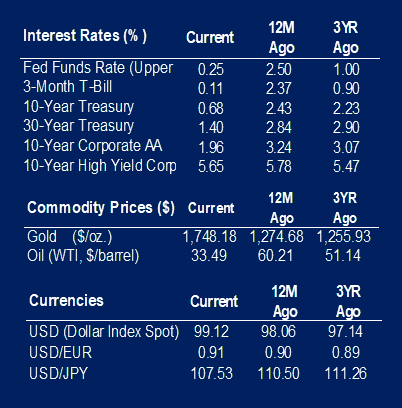